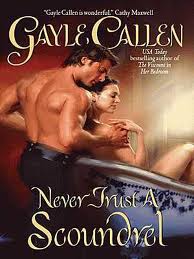 
Miss Grace Banbury was in shock. Her mother put her up as a prize in a high stakes card game, and now the gentleman who won is ready to claim her! But Grace has other plans. She just needs the dastardly rogue to go along with it . . .


A notorious rake from a scandalous family, Daniel Throckmorten has no use for blushing virgins. Yet there’s no denying the attraction for the beauty standing before him, proposing an enticing wager: He will use all his charm and wit to seduce her into his bed . . . and she only has to resist. If she succeeds, she wins enough funds to secure her own future. If he wins . . . she’ll be his. Daniel has never been so tempted–and he has no intention of losing . . .

My Review:
Miss Grace Banbury, has grown up with a mother who has a severe addiction to gambling, now she finds out that her mother lost in a high stakes game and they lost everything, including Grace herself. So when the rogue that won her and everything her family owns, she and Daniel Throckmorton come to a scandalous wager, where Daniel will try to seduce her as his mistress, and if Grace resists she will win back her father’s violin where she could sell it to provide for herself and her brother. However things never go as planned, and Grace finds resisting Daniel Throckmorton alot more difficult than she ever thought it would be, and desperate to win such a wager. Daniel has always used his roguish charms to win the ladies into his bed, but has never found one that has charmed him as much as Grace Banbury has done, and not only does he wish her in his bed but in his life. But who will be the winner of this dangerous wager?

Never Trust A Scoudrel is the first installment in the Scandal’s son series that Gayle Callen has created for her avid readers.Grace has lived a proper life in Society, but her mother is a different story altogether. When she finds out what her mother has done to both her and her brother, she is at a loss as to where they go from here. But when she meets Daniel and battles wills with him, and comes to a agreement on a wager, she knows that she is in bigger trouble than she would have ever thought. Because Daniel tempts her to such sensual and wicked delights that she wonders if she can last the few weeks they decided on. Daniel Throckmorton, lost his father when he was younger, who was a great muscician, and his mother once had a passion for music. But loved his father so much, she lost that deep passion for music, and Daniel himself, even though quite talented with music, doesn’t want to hurt his mother, so he refuses to pick up any instrument. However once Grace enters his life, he starts to wonder if she is the key to his very happiness that he has denied himself of for so long. This was truly such a wonderful story. Although even though I loved the plot to this story, I found that I couldn’t get into the story as much as I have with her other books, I found the flow to be erratic at times, yet at others flowed quite smoothly. But once I got half way through, it started to even out a bit, and become more like her other stories that I have come to love. I will say that the ending was magical, and definitely had me shedding a tear or two (in a good way) and it was also good to see characters from her previous book The Visount In Her Bedroom too, all in all a truly wonderfully written story, that will make you fall in love with these characters that will steal their way into your hearts. A very captivating romance!!

My Grade On This Book
4 Blossoms

One thought on “Book Review-Never Trust A Scoundrel”