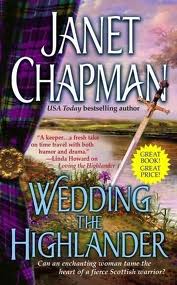 A runaway beauty finds love in the brawny arms of a handsome stranger.

Talented surgeon Libby Hart is fleeing to Pine Creek, Maine, when her car spins out of control and crashes into a pond. She is rescued by Michael MacBain, a medieval highlander trapped in the modern world by a wizard’s spell. Wounded in love once before by a modern woman, Michael wants nothing to do with Libby, but he can’t resist the intense desire she stirs within him. Can this proud warrior pledge his heart to a woman whose secret threatens to change their lives forever?

MY REVIEW
Summary:
Libby Heart, a surgeon in California, discovers that there is something going on with her, she is able to heal others with a touch of her hands, so she goes to the other side of the country to get some clarity, and ends up crashing into a pond, and is rescued by a breathtaking highlander, who sets her teeth on edge. Michael is trapped with the ‘moderns’ in a century he doesn’t understand after being brought here by a wizard, whom messed up his spell bringing other highlanders with him. After loving and losing two women, he doesn’t know if he can trust another to give his heart to, but with his eight year old son’s influence, Michael will start to realize that when you find someone to hold onto you fight to be with her forever.

The Hero (Michael MacBain)
Michael, was brought into the modern century by a wizard with fellow clan members and enemy clan highlanders from eight hundred years previous. Where Michael lost a woman he loved, and then fell in love a second time with a modern woman, but ended up losing her too but gained a son who he wouldn’t trade anything for. Now he has met Libby, who brings out a intensity in him and he can’t resist her and finds that he is falling hard and fast.

The Heroine (Libby Hart)
Libby, has just discovered that she is like her grandmother, with a gift that no one could ever understand, only view her as crazy. So she decides to leave a career she loves as a surgeon, and go to the other side of the country to Maine, feeling drawn to a certain house in the mountains there. Only she never imagined that she would meet her destiny, in a sexy yet infuriating highlander, who takes away every defense she has and she can’t help but fall in love with a man who needs her just as much as she needs him.

My Thoughts
Wedding The Highlander is the third in this wonderful series, that I keep falling for over and over….Janet Chapman is a new favorite author. In a way her humor is similar to Sandra Hill, however there is still a serious tone to the story, and a tender romance in every story that will pull at the readers heart strings….After seeing Michel in the previous two books, I was excited to read his story. From the first book, my heart went out to this characters, and Chapman definitely fulfilled every wish for him….Wedding The Highlander was definitely a sparkling gem…I felt enchanted by the romance that builds between Libby and Michael, and his son Robbie will just make you smile, I think I just loved everything about this book, and there was still a good plot that will keep you flipping those pages as fast as you can read them….Definitely A 5 for me!!!!

My Grade On This Book
5 Blossoms