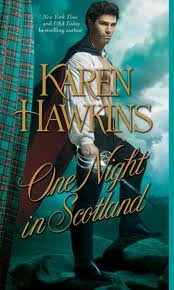 Synopsis
New York Times bestselling author Karen Hawkins begins a sparkling new series with this thrilling tale of a desperate beauty on an urgent quest, a , dark earl scarred by his beastly past—–and ,the ancient treasure that binds their fates.

A MYSTERIOUS ABDUCTOR .. .
Someone is holding her brother prisoner in exchange for a gold-and-onyx box covered in mysterious runes, so Mary Hurst boldly sets out from the family vicarage to find the priceless artifact. But the man who possesses it, Angus Hay, the Earl of Erroll, is less than sympathetic to her plight.

A FORBIDDING STRANGER .. .
Himself a prisoner of his dark past, Angus refuses to yield the box — or allow Mary to leave! Suspicious of the alluring lass’s mission, he vows to wrest a confession from her, but unearths a fiery temper and a will as strong as his own.

AN UNBREAKABLE CURSE…
Passion flares between them, but now there is more at stake: an unknown enemy is hunting down the precious box, and will stop at nothing. Risking all for love, Angus must solve the mystery behind the runes … and trust the only woman who can awaken his forgotten heart.

Summary:
Mary Hurst, when finding out one of her brothers, is a prisoner, and needs to find a certain ancient box to trade for him, she heads up north to Scotland to find the artifact so she can save her brother’s life. After traveling long hours and when she finds the Earl of Erroll, he is less than understanding to her ‘story’ and goes about and keeps her prisoner in his castle. Angus, although he is tempted to believe Mary, he knows that there is someone that is after the priceless artifact and he must be a hundred percent Mary is who she says she is, and knows that keeping her here until he can bring a colleague of his to confirm her identity is the only way. What Angus never imagined was the intense connection that flares between them with just one kiss, and he knows that he must never give in, because if he does than he will fall for her…hard

The Hero (Angus Hay, Earl of Erroll)
Angus, although he is very wealthy, is secluded and lives in a remote castle in Scotland. After losing his beloved wife to a fire that destroyed part of his home, and being scarred himself he knows he doesn’t have a choice but living a secluded life, with his cousin, continuing on with his work, dealing with precious artifacts. When Mary shows up his life goes upside down and part of him wants to resist her, and then there is a part of him that wants to give in to the passion that fires up whenever she is near.

The Heroine (Mary Hurst)
Mary, upon receiving a letter informing her of her brother’s situation she knows that she must save his life and do all that she can to get her hands on the artifact. Mary, even though her sisters have been in love and married, it has never happened for her, and now when she meets Angus, she is unexplainably drawn to him and even though he is keeping her prisoner she also finds herself falling for her captor.

My Thoughts
One Night in Scotland is the first book in the Hurst Amulet series, and I have always loved her books and this was pretty amazing, not my favorite of hers, but enthralling and was like many of her other books where it just draws you into the story vividly. One of the things that I loved about this book is how perfect both Mary and Angus seem to be for each other, even though there are some pretty heated arguments, and violent tantrums that just made me laugh, and think ‘oh boy, I hope I never meet a man that makes me want to sing like a banchee or an opera singer just to get his attention’. Although once I really got into the, I started to find myself really enjoying the story, the characters, the plot and the amusing interaction between the characters, that made it a fun tale of romance with a hint of mystery that will make you not want to put the book down and keep on reading until the sun goes down.

My Grade On This Book
4 Blossoms

Favorite Quote
Angus had never been so furious in his entire life. Every word she uttered was a deliberate challenge. Well, the chit was about to get what she so desperately desired: an answer for her impertinence. He bent his head and kissed her, pouring all of his discontent, fry, and heated desire into it.  He stepped away and her hands fell away from his lapels.
“Let that be a lesson to you not to try my temper”