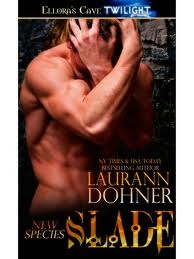 Dr. Trisha Norbit is flat on her back in a hospital bed, pinned under a really big New Species male. Though drugged out of his mind, he promises her ecstasy and is determined to deliver-but hospital staff intervenes. 215 is a man Trisha will never forget. But, when she meets him again at Homeland…he doesn’t even remember her The nosy new doctor wants to know all about the breeding habits between humans and Species. Slade proposes a hands-on education but she’s not interested in a one-night stand. He can’t offer more because he’s haunted by the memory of a woman he once tried to claim. He’s shocked when he realizes they are one and the same. He’s blown it-she’ll never give him a chance now.But, when her life is in danger, he’s the only one who can save her. As they flee through the wilderness, their desire ignites and cannot be denied. Hot sex, on the run, has consequences that are even more dangerous and will change their lives forever.

Summary:
When Trisha first meets Slade, she is his doctor after the new species are first rescued and released, and he promised sensual bliss, but when she see’s him again he doesn’t even remember her. Trisha is more than curious, naturally about new species, and now that she is their Doctor, she never thought that when dealing with Slade he wouldn’t remember his erotic promises to her or that hot searing kiss, but she is determined to make him live up to his promises to her. When Slade and Trisha are thrown together for survival in the wilderness, with men hunting them down, they know they must do whatever they can to survive, and sparks fly and before either of them realizes it they don’t want to let each other go when they reach safety but is there a future in store for them?

The Hero
Slade, the pain and grief from what both he and his fellow people have suffered is still fresh, and even though they are free, they are always in danger, and when he ends up having to save the doc’s life, he doesn’t know if he can let Trisha go, not after he has only had a small taste of her, and Slade knows that he could never let her go now that he has something to hold onto that is His.


The Heroine
Trisha, is first and foremost a doctor,and loves her work and thrives with the New Species. Despite the danger involved, she has never felt more satisfied with her work, but now she has another complication in her already hectic life…a new species male named Slade. He sends a shiver through her system whenever he is near, and his kiss nearly sends her to her knees but what she fears the most is losing him.


My Thoughts
Slade, the second installment in the New Species series, was actually pretty good, not as good as the first, however I did enjoy it to an extent, there were a couple of aspects that I didn’t like, it wasn’t exactly smooth sailing throughout the story, however I really liked the romance that develops and I really soaked up all the action and suspense, which was a lot more than I ever expected. Overall it was a average good romance, scorching bed scenes, but there was also a sense of a solid love story. Even though the blurb says it can be a stand alone series, I would disagree, you lose understanding the back story which I think is vital from what I have read so far. Overall a good read, but it did drag a bit in the middle however it picked up later where I felt I could get more into the story. Other than that I would say it would be a good romance. I probably won’t re read this but I am glad that I did read it…..A average good romance that you can be content with on a certain level.


My Grade On This Book
3.5 Blossoms

One thought on “Book Review-Slade”