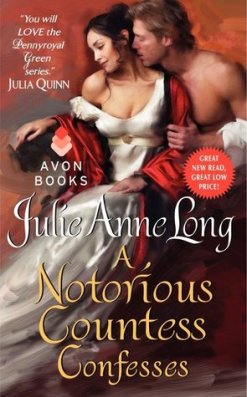 She rose to spectacular heights…

From Covent Garden to courtesan to countess, beautiful, fearless, shamelessly ambitious Evie Duggan has riveted London in every role she plays. But the ton never could forgive her scandalous—if shockingly short—marriage, and when her star plummets amid gleefully vicious gossip, the countess escapes to the only legacy left to her: a manor house in Pennyroyal Green.

He never expected to fall so hard…

He has the face of a fallen angel and a smolder the devil would envy, but Vicar Adam Sylvaine walks a precarious line: resisting temptation…and the wild Eversea blood in his veins. Adam’s strength is tested when scandal, aka the countess, moves to Sussex. But when a woman who fiercely guards her heart and a man entrusted with the souls of an entire town surrender to a forbidden desire, will the sweetest sin lead them to Heaven…or make outcasts of them forever?

My Review
I have been wanting to read this book ever since it came out last year. So when it became available at my local library, I knew I had to pick it up. There have been some books of this series I have loved and other that ended up being averagely enjoyable, A Notorious Countess Confesses is up there on the top of my list of favorites from this author.  This one is a bit different than most regency’s, I loved the unique setting that the characters are placed in.

It begins when Evie Duggan, after becoming a widow and with rumors and scandals flying around London about her, decides to settle in Pennyroyal Greens, to have a new start. When she arrives, she causes quite a stir among the country folk, who view who as a woman ripe with scandalous behavior. She decides that she must make friends in order to become more accepted so that she can make a life for herself. But its harder than it looks. When the Vicar, starts to interact with her, she finds herself wanting more than just a content life, she craves his touch like none other. His goodness and sincerity overwhelms her, and before she realizes it, she wonders if they could ever have a future together. Adam, depends on his livelihood as the Vicar. He has sacrificed much for this life, but in some ways its well worth it. When the new countess shows up in town, rumors fly about her devious and scandalous ways, and must guard himself carefully. But there is something more to Evie than meets the eye. There is a instant connection between Adam and Evie, but in the end will Adam choose his people over Evie, or does his love for Evie be strong enough?

There was quite a bit that I found very like able about this story. The characters in this story were very endearing and I liked them from the first chapter. Adam is unlike most heroes of regency romance. He hasn’t had a ton of experience with women, in fact the heroine in this story has more history with men than Adam seems to have with women. Adam is very sincere and good hearted, and I loved how caring he was at times. His circumstances and personality are of a more gentle nature, but I enjoyed seeing Adam interact with Evie, Evie has a very strong willed vitality about her. I liked her from the beginning, Evie may have a bit of a scandalous past, but only in order to protect her family.She also has suffered quite a bit and I loved seeing her with Adam, they end up complimenting each other in such a unique way. A charming and warm romantic tale that is bound to warm your heart!! BRILLIANT!!