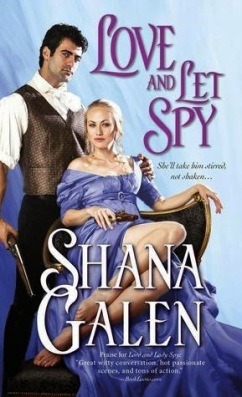 A beautiful and eligible member of the ton, Jane has more than a few secrets: she’s one of the Crown’s most elite agents. She may be deadly, but she doesn’t know a thing about fashion, flirtation, or love . . . until Dominic Griffyn shakes up her carefully stirred world and asks her to be his bride. He’s exactly the kind of man she’s not looking for. And he’s dangerous, because falling into his arms is so much more satisfying than saving England from her enemies.

He’s an improper gentleman who needs a wife. . .

Tall, dark, and tortured, Dominic Griffyn is haunted by demons from his past. When his stepfather insists that he marry, Dominic allows himself to hope that the beautiful but mysterious Miss Bonde might help him forget his troubles. As they grow closer, it’s clear that there’s more to Jane than danger. She might be just what his neglected heart needs.

Dominic Griffyn, has some demons from his past that still haunt him, and the last thing he needs is to be forced to marry a woman he doesn’t know. But when a near scandal came about because of him, he knows that eventually he will need to marry. Jane Bonde, lost her parents as a girl, and her uncle took her in, and trained her to be a spy for the government. When her aunt and uncle tell her she will be married to Dominic, she is shocked. All she wants in her life is to be a spy, how on earth could she be a wife too? But when a enemy of her uncle’s, threatens everything they hold dear, Dominic and Jane may be the key to saving them all from a enemy that is determined to destroy them all at any cost…

Love and Let Spy is the third in the  series and the first book from this series I have been able to read. I found that this story just flew for me, and by the end, I was like…how on earth did that happen? I found this story to be fun and full of charm and wit. Even though its part of a series, it can be read as a stand alone, but I do wish I had read the series in order, just by having more background information on the other characters involved in the story, but not necessary.

I loved the way that the plot came together, its a easy story to follow and adds some entertainment to keep you laughing for a while after the story is over. The chemistry between Kane and Dominic is electric and instantaneous, this author delivers a story that has similarities to James Bond, that will only entice you further into the story. A lovely romantic tale of sexy spies, dangerous missions, and a story that never stops!!! STIMULATING ON EVERY PAGE!!!

Other Books In Series
Lord and Lady Spies
True Spies